Manchester Street School was established in 1874. As the original school in Feilding, it has had a long and interesting history. It is hard to imagine what the first class of six children felt as they entered their new, small school, back on the 2nd November 1874. Most of these children had just arrived from London on the immigrant ships with their parents. 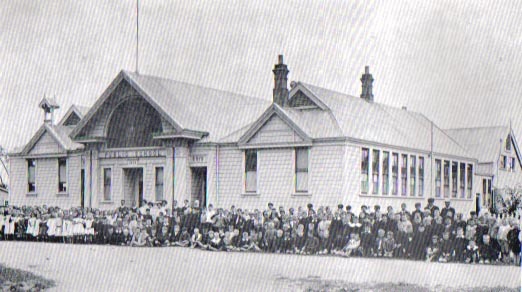 The Old School Buildings in 1910

The original school buildings were closer to Manchester Street than the current ones, and were placed in a natural clearing that was covered only with flax and toi toi, like other parts of the settlement that were not under the dense bush. This original school was destroyed by fire on the 25th December 1898. When this happened, classes had to be spread around available sites in the town such as the Drill Hall and the Church halls. 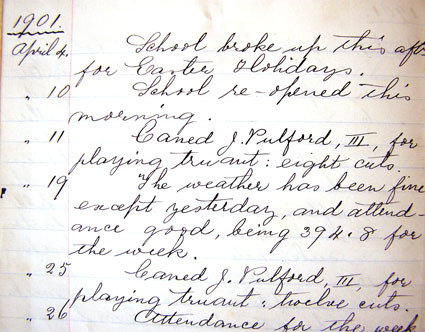 The school archives contain the original school 'logs', which record that discipline was very different in the earlier days of the school!

On January 31st 1900, the newly erected school building was formally opened. This block was an L-shape, which eventually became a U-shape as the roll increased and further buildings were required. In 1901, the school reached a status sufficient to justify its establishment as a District High School.

Once again, fire destroyed the school on December 5th 1954, and the current main administration block and associated classrooms were built. The school hall was opened in 1956 after a grand effort by parents to raise money for its construction.

As the roll continued to grow, so did the number of classrooms. The school taught pupils from New Entrant to Year 8 (Form 2) up until the time the Feilding Intermediate School was opened in 1965. Woodwork, metalwork and cooking classes were part of the education opportunities offered by the school.

Fire again caused chaos at the school on 21st November 1993, after which a new block was built near to Manchester Street, close to the original location. 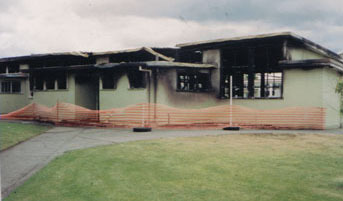 Manchester Street School has continued to serve its pupils well over its long history. The grounds, the largest of all Feilding Primary schools, cater for a range of activities for pupils of all ages. Play areas have been constructed for juniors as well as a senior adventure playground.

One of the most consistent features in the school’s long history has been the presence of school caretaker, David Belk, who has maintained the property and overseen improvements since 1983. 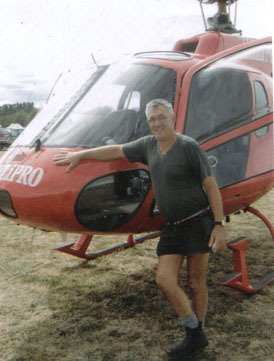 To celebrate 25 years of service to the school, Mr Belk was treated to his first ever helicopter ride, watched from below by the whole school, forming the numbers 25 on the school field! More than just a caretaker, Mr Belk takes a personal interest in every member of the school family. His memories and photographs of his time with the school are a precious part of our records.

With its modernised buildings, attention to the curriculum basics and a dedicated staff, Manchester Street School is well poised to take advantage of the numerous opportunities that education will make in the future.

To view the school archives,contact the school secretary at 06 323 6175 or email the office.

Further information about Feilding and our school may be found from the following sources:
Feilding information
The Encyclopedia of New Zealand
Feilding Public Library

You may also be able to locate schoolmates on the Old Friends website.